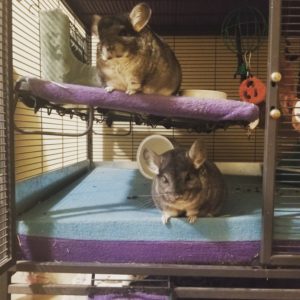 This video tells the story of Luna and Sol, 2 chinchillas that were saved from living in a fur farm. Their mom was one of several chincillas saved from the farm in 2018 by Direct Action Everywhere in an open rescue, born to show the horrific conditions that animals raised for fur are subject to.

In August of 2018, Ateret Goldman adopted Sol and Luna, helped by myself, Ora Goldman. Ateret and I provided transportation to Colorado, their initial housing and animal care.
It was a learning process. Some of the learning was that they needed a chinchilla proof environment requiring temperature control and furniture and flooring that they could not chew and destroy and that would not be detrimental to their health. There was a desire to let them free-range a room because it is heart-rending to have them locked up in a cage all the time. Originally Ateret was sharing a room with them. She had to install a loft bed so they wouldn’t jump on her at night or chew the blankets, which was bad for their digestion.
It became clear that because of their dust bathing and the amount of activity at night, it was not too practical for a human to share a room with them. Ateret also decided to attend college and realized she would not be able to take them with her. Finding a person with the resources to dedicate a room for Sol and Luna is not a small feat.
As of March 2019, I (Ora Goldman) had fallen in love with them and decided to adopt them. The ASH co-op agreed that they could dedicate a room for them which was cut in half with a constructed wall. They currently reside there and have about 150-200 sq ft of dedicated space which is outfitted with ramps and places for them to jump and play in addition to their home (cage) which remains open.
And, good news, prior to their rescue, West Hollywood had become the first city to ever ban fur. Since their rescue that was followed by Berkeley, San Francisco, Los Angeles and finally…the whole state of California now bans fur. So Sol and Luna are part of the successful change we are making!